With COP26 well underway, governments will start to think about what changes can be made to limit the impact of human existence and consumption on the planet. To reduce animal agriculture, and look for alternative ways of feeding a growing population that has significantly less environmental impact, will be a challenge.

With COP26 well underway, governments will start to think about what changes can be made to limit the impact of human existence and consumption on the planet. To reduce animal agriculture, and look for alternative ways of feeding a growing population that has significantly less environmental impact, will be a challenge.

Nonetheless, more of us in Western countries are living off of plant-based diets than ever, and there is a growing awareness of animal agriculture's impact on our health, the planet and the animals suffering within these farmed spaces. The organised farming of animals was once a celebrated phenomenon and a milestone in human advancements in food production. However, it has become clear that the farming of animals at a mass scale has a variety of consequences and complications.

For example, animal agriculture uses 70% of all agricultural land and is one of the leading causes of deforestation, biodiversity loss and water pollution. In addition, it is 14.5% of global greenhouse gas emissions, making it the second highest cause of global emissions behind the burning of fossil fuels. As well as this, eating too much dairy and meat is linked to higher risk of developing heart disease, type 2 diabetes and cancer. In 2015, the World Health Organisation said that eating too much red and processed meat can be as carcinogenic as smoking cigarettes. In addition, animal agriculture operates under cruel measures whereby many animals suffer before they are killed for their meat.

What if you still want to enjoy the taste of meat but want to know it was sourced ethically without harming animals, the planet or yourself? A few decades ago this would have been impossible. However, today there are start-ups and developed businesses to keep an eye on and try out, as they are paving the way to a more plant-based society. Here are some amazing names to look out for.

Founded by Benjamina Bollag, Higher Steaks is a lab-grown meat alternative provider with the mission to make meat better for people, the environment and animals. Through taking a non-invasive cell sample from the animal, they guide the cells to become muscle, fat and other types of meat tissue. The end result? A steak that looks, tastes and smells like meat, because it is, but doesn’t include harmful antibiotics, require animal slaughter or harm the planet.

Brought up frequently in this brand’s pitches and advertisements is the rate at which the human population is growing, and the likelihood for meat demand to increase dramatically. Already, people are more aware of the negative consequences of conventional meat and the propensity for diseases, as seen through the global pandemic.

Also, the physical space and resources used in rearing animals and the energy used to transport them all have tremendous negative effects on the planet. Lab-grown meat like Higher Steaks provides actual meat to consumers without all these negative effects and without harming a single animal. What’s not to like? 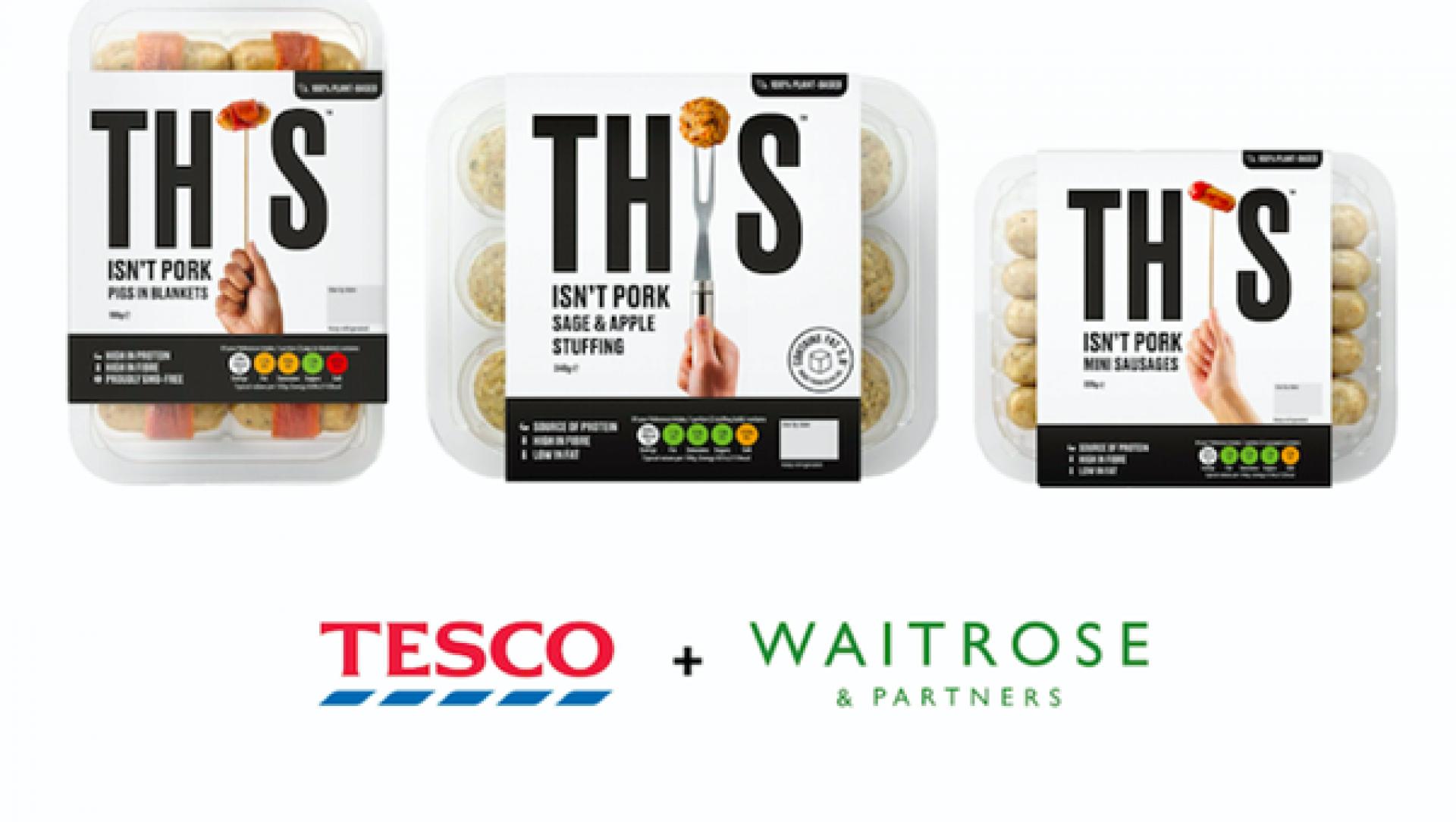 This is the brainchild of meat lovers and beef-burger connoisseurs Andy and Pete. It is no surprise then, that their plant-based alternatives resemble meat so much - even the most avid-meat eater wouldn’t notice the difference. In fact, on their website This showcases a video of them fooling Instagram influencers into thinking their products are genuine meat.

The ethos of the brand comes from an understanding that humans should probably consume a lot less meat, but there are few meat alternatives that are actually as satisfactory as meat. This meat comes in the form of meatballs, bacon bits and chicken nuggets (to name a few) and can be used in fry-ups, pies and pretty much anything else you would usually cook meat into. If there’s a product that provides a satisfying meat-like alternative whilst being delicious, better for the environment and convincing enough for any meat-lover - this is it. 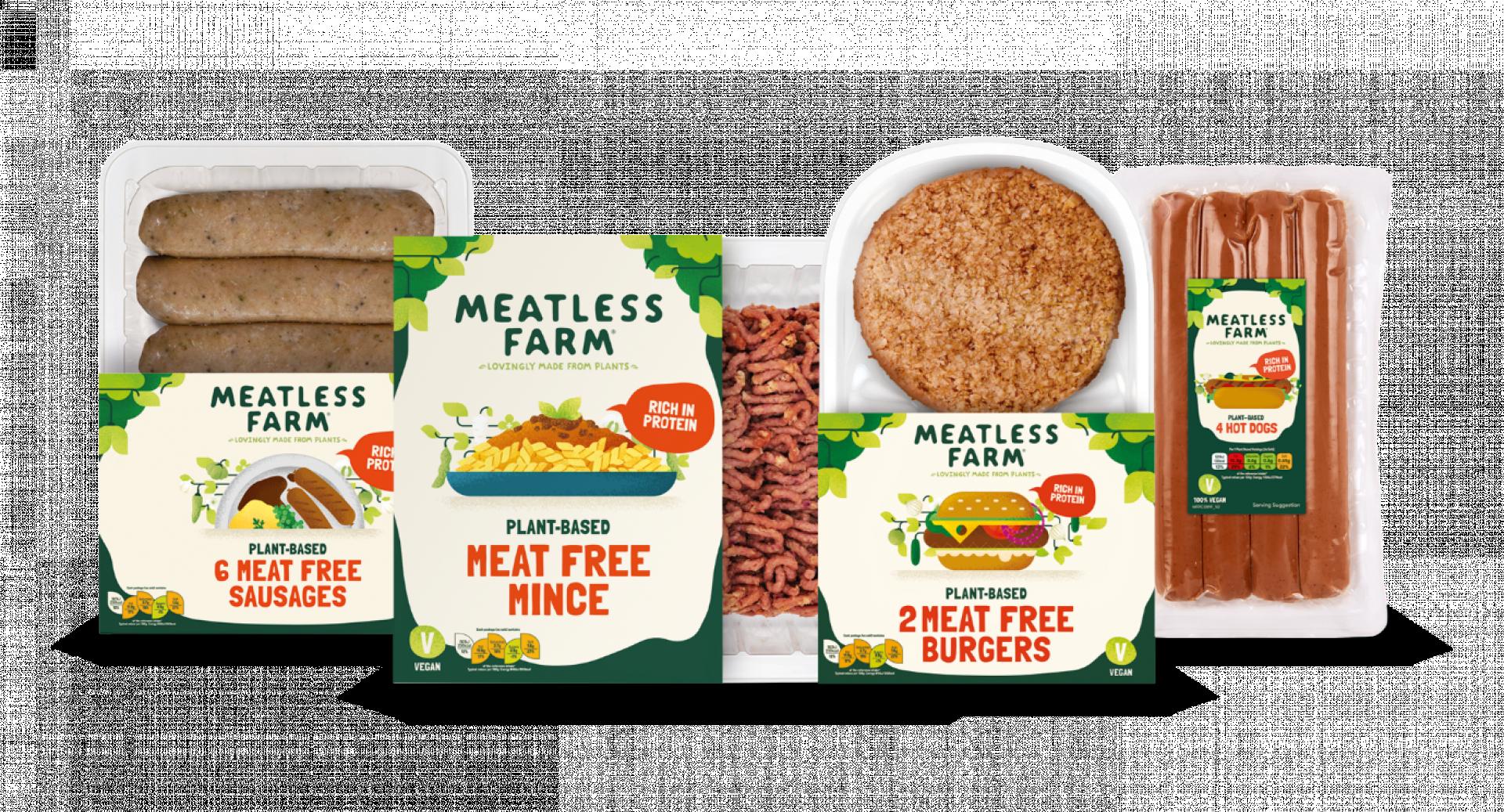 Meatless Farm is well established in the meat-alternative space.This company has developed a great plant-based burger patty, minced meat and sausage that looks and feels like the real thing and packed full of flavour. Their recent ambassadors have included Tour De France cyclist Mark Cavendish and German-midfielder Toni Kroos, showcasing the brand’s triumph.

The company was founded by Morten Toft Bech in 2016. After health concerns and worries about the environment and animal cruelty, Bech ventured to create a delicious plant-based alternative to meat that was just as delicious, yet much healthier and more ethical. Today, their mission to make changing to meat-free options easy, can arguably be described as a success, as you can find them in most supermarkets across the country. 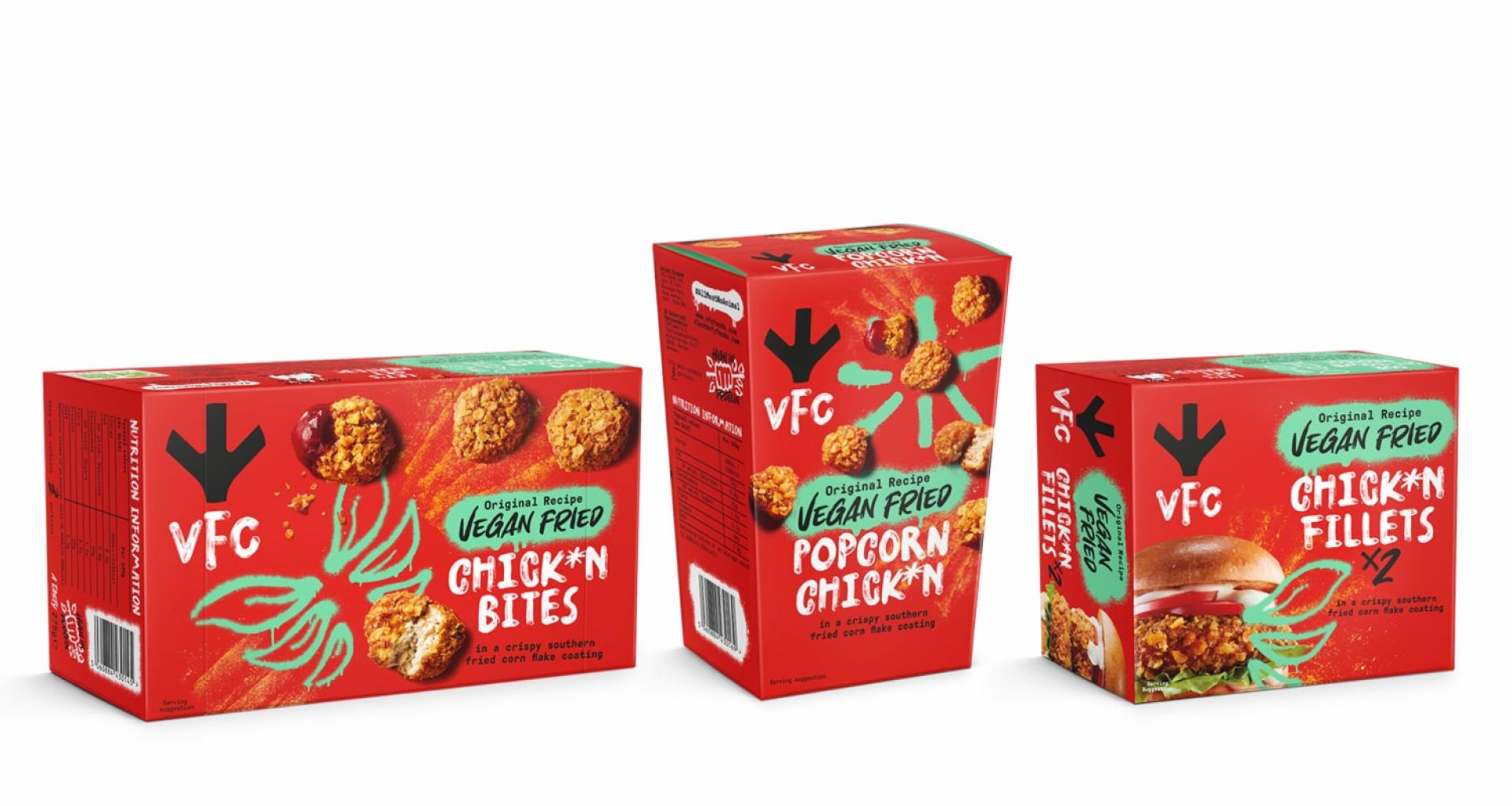 This brand is a (you guessed it) vegan alternative to Kentucky Fried Chicken. Boasting chicken fillets, bites and popcorn chicken that would give the real thing a run for its money. These delicious substitutes are made from wheat protein wrapped in Southern fried corn flakes and are available at Tesco and online vegan supermarkets - so you can enjoy the delicious taste of fried ‘chicken’ from the comfort of your home, without impacting the environment or animals.

VFC was founded by the co-founder of the global Veganuary movement, Matthew Glover. The business was created to create impact and tackle the problems caused by animal agriculture. They are aware that, as well as red meat, the breeding of chicken for consumption is also a problem.

In addition, they realise the amount of feed needed for farmed animals destroys forests and waste from farmed animals pollutes rivers and seas, killing aquatic animals. A self proclaimed ‘positive rebellion’, VFC highlights key issues in animal agriculture whilst providing a viable and delicious alternative. 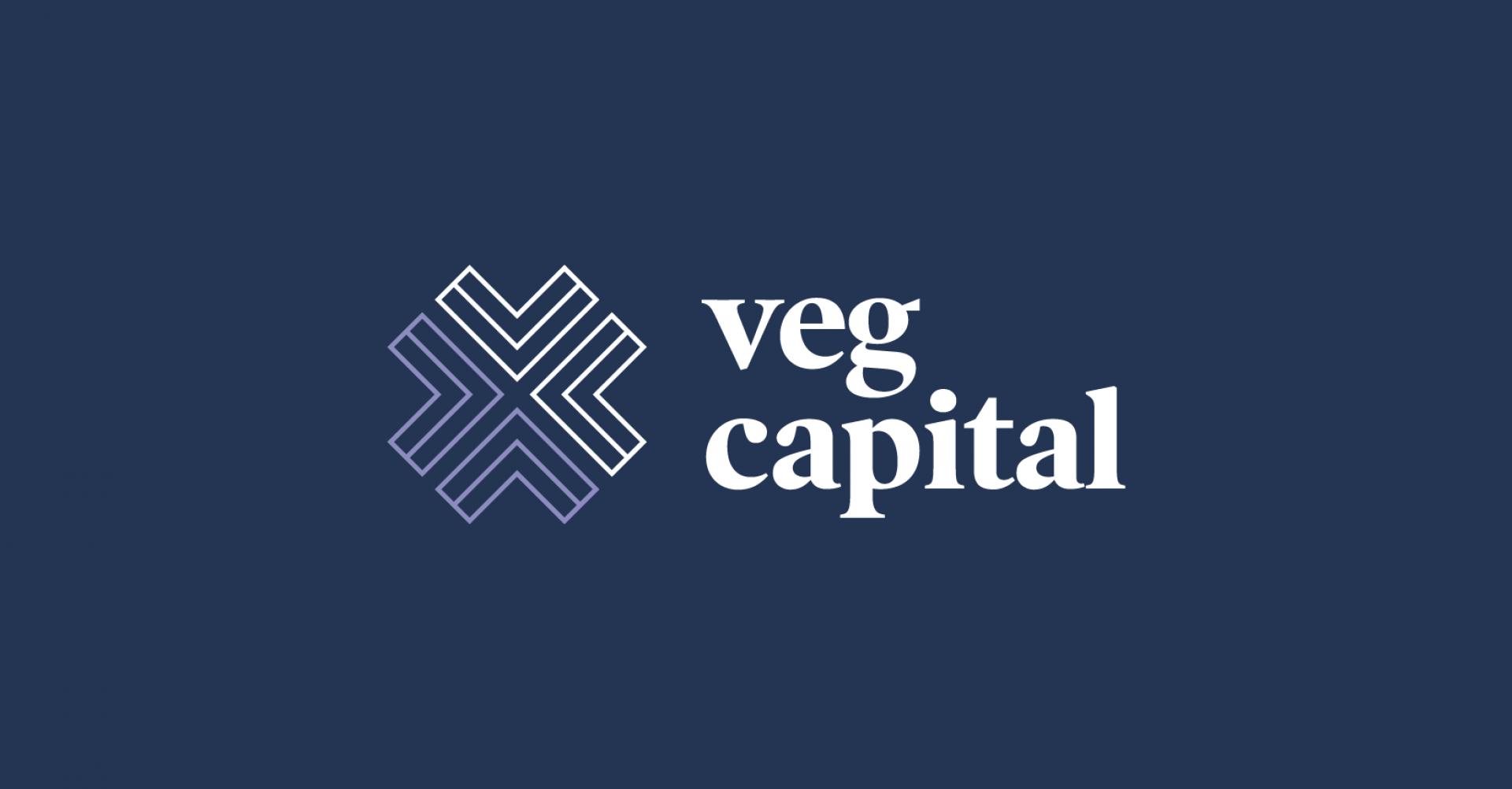 Different from those mentioned above, Veg Capital provides investment into early-stage companies wanting to replace animal and meat derived foods. This private family fund was started out of the belief that animal agriculture is a cruel and unsustainable means of food production. Therefore, Veg Capital invests in the best alternatives in eggs, dairy, meat and fish.

It gets better. This investment fund donates all of their profits to charities based in the UK and Europe, who are promoting plant-based eating or raising awareness of animal suffering and the environmental consequences of animal agriculture.

Their aim is to instigate large-scale disruption to the trillion dollar animal agriculture industry, believing that the current system is flawed and can’t be sustainable as populations grow. The fund provides Angel, Seed and Series A funding to start-up companies in the plant-based foods space. So far, they have invested in Mighty Pea pea-based milk alternative, vegan online supermarket TheVeganKind, two of the businesses on this list; VFC and This, as well as many others. Their investment and non-profit motivations certainly make them an investor to celebrate and look out for.

With the climate crisis at an all-time peak, and the success of the movement dependent on what happens in the next few years, a shift towards more sustainable and ethical ways of producing food is made that much more important. In recent years, Western societies have naturally moved to a more plant-based diet, with less meat and dairy in it.

With every year that passes, more convincing meatless and plant-based alternatives come to the surface. The businesses above showcase the best innovation in meat alternatives, all of them created with a desire to provide something they didn’t believe was in the marketplace yet. All with a passion to change the face of food agriculture as we know it. Through providing an alternative, these brands are subversive and disruptive in their own right, fighting for food that is ethical, sustainable, healthy and delicious all at once.

Intro to myself / Harmonic:

My role within Harmonic has been supporting FMCG business hires in Finance, Supply Chain and Operations generally so feel free to reach out on Dan@HarmonicFinance.com should you want a chat about the market, an intro to Harmonic or any advise for hiring at the moment in a very buoyant market.

With thanks to Serena Haththotuwa for support on this article.

Step aside, E-commerce. It’s time for Q-commerce to shine.